We started Five Beers to Know as a form of compromise. With 7,200+ craft breweries across the United States, the amount of new beers produced in a given week is staggering. In order to post news on all of them, we’d need better cloning technology. We’re on our sixth version of Keith here, and let’s just say we’ve made some mistakes. But pretty soon we may not even need him, or Five Beers to Know, because of the government shutdown.

Yes, while Trump tries to hustle money for his authoritarian vanity project, he’s putting everyday people out of work, which means the TTB remains shutdown, which means new beer applications and formulas aren’t being approved, which means craft breweries are being forced to sit on beers they planned on releasing (some even saying they will just have to dump them). This especially sucks in the current market where new beers are now expected by customers and craft breweries planned their 2019 accordingly. What a joke. To help easy the pain, please enjoy Five Beers to Know while there are still five new beers to know, and good luck to all the craft beers sitting in brite tank limbo out there. Unlike this sixth version of Keith (mercy killed due to lack of funds), hopefully you will live to see the other side. Oskar Blues Brewery and Cigar City Brewing’s new collaboration beer, Bamburana, is an imperial stout brewed with figs and dates and is double barrel-aged — in both whiskey and brandy barrels — and aged once more in tanks with Amburana wood spirals. Bamburana is the first nationally distributed collaboration between the two breweries — a big, sticky, complex 12.2 percent ABV beer that will be released in 12-oz cans in mid-January. Bamburana is the co-creation of two giant craft beer personalities — Oskar Blues Brewery’s Head of Brewing Operations Tim Matthews and Cigar City Brewing’s Brewmaster Wayne Wambles. Their goal was to craft a brew that would marry the flavors of double-barrel aged imperial stout and Amburana wood. Amburana wood is an indigenous South American wood that imparts unique warm and savory flavors and aroma.

“We were excited to see the results of infusing Amburana wood into a big, barrel-aged imperial stout,” said Wambles. “We were pleasantly surprised with the vanilla and gingerbread spice nuances this South American wood contributed into the finished beer and look forward to putting this delicious beer in front of folks!”

“We’re both known for barrel-aging big, malty, dark beers,” added Matthews. “The culinary goal of this project was to match the flavors of a rich candy cookie with fig filling and gingerbread spice. We spent a bunch of time selecting the right figs and dates to hit exactly the right flavor notes, lend a slight stickiness and cut into the rowdiness of the Amburana wood.”

Karl Strauss will have its Boat Shoes on all year 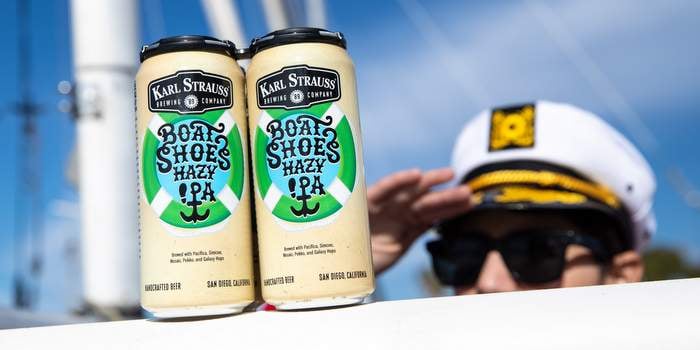 Karl Strauss Brewing Co. — which we profiled this week — after releasing roughly 170 beers last year is bringing back at least one more with the return of Boat Shoes Hazy IPA to its year-round offering.

Boat Shoes was originally born out of Karl Strauss’ Small Batch program. Head Brewer Sean Albrecht (the talent behind Mosaic Session IPA as well) first tried his hand at this New England-style IPA at KARL’s satellite brewery in 4S Ranch. The initial batch built an immediate cult following and sold out within days. Since then, it has been released several times with much fanfare — including some of the company’s highest engaged posts on Instagram and more than 1,500 ratings on Untappd so far. Beyond that, Boat Shoes Hazy IPA nearly won a nationwide blind taste test when it received the Bronze Medal in Brewing News’ National IPA Championship. As for the name itself…

“I was back east for CBC [Craft Brewers Conference]. Everyone was wearing boat shoes and the name just stuck. Hazy IPAs are refreshing and easy-drinking, so the name fits nicely with the style of beer. You can’t really be stressed out wearing Boat Shoes,” said Sean Albrecht, head brewer at Karl Strauss Brewing. Lakefront Brewery has officially added a New England IPA to its year-round lineup — Hazy Rabbit. “About a year ago we launched a limited-edition double IPA called Mangy Rabbit,” said Lakefront Brewery’s Business Development Director Chris Johnson. “Mangy Rabbit was also a beer from our history and heritage, partnering with a local restaurant.”

Hazy Rabbit Hazy IPA is its distant cousin from out East. It is brewed with Cascade, Idaho 7, Mosaic, Citra, Denali and Azacca hops. The ABV is 5.6 percent and it rates 33 IBUs. Hazy Rabbit delivers sweet papaya, ruby-red grapefruit and lush pineapple aromas. A healthy dose of flaked oats in the mash adds a mild sweetness and a smooth mouthfeel. Heaps of late-boil Idaho 7, Mosaic and Citra hop additions saturate every juicy swig with over-ripe citrus and tropical fruit flavors. It was bottled in early January and is available Feb. 1. Denver-based Seedstock Brewery is releasing its Imperial Stout for the first time this Friday, Jan. 11. The Seedstock family has been brewing its special stout for almost 20 years for their personal stash, but this is the first time they’re releasing it at the brewery. Seedstock’s Imperial Stout is mysteriously black with a thick tan head. It has rich, roasted malt flavors of dark chocolate and dried fruit and finishes dry and warm. It is 9 percent ABV and pairs well with a stocking cap. Is it an IPA disguised as a Kölsch or a Kölsch disguised as an IPA? Dogfish Head brewers will let you make the call on this mystery in early January as they uncloak their newest Double IPA, The Perfect Disguise (8 percent ABV, available in 12-oz, 6-pack bottles.) On the surface, this golden beer looks like a straightforward Kolsch with a crisp Kolsch yeast and traditional German malts and hops, but things aren’t always what they seem. Your first sip of this beer lets you know it’s something different. The luscious body and creamy mouthfeel is a result of a unique German chit malt. Hiding deeper behind that German disguise is the double-dry hopping of an American Double IPA, with nearly 4 lbs of German and American hops per barrel, bringing tropical flavors of citrus, tangerine, mango, gooseberries and peach.

“Our raison d’être at Dogfish is to innovate and not follow, so on this exploration of goodness in the world of IPAs we’ve chosen to chase the creative white space in the sphere of beer recipes, concepts and ideas and I think we nailed it with our adventurous take on a Double IPA with The Perfect Disguise,” said Sam Calagione, CEO and founder of Dogfish Head Craft Brewery. “We punched up the creativity by layering in two different yeasts which bring forth the most delicious flavor profiles from both a Kolsch and an IPA — a delicious experiment.”

The artwork for The Perfect Disguise was brought to life and designed by highly acclaimed artist, Michael Hacker, who partnered with Dogfish Head for the 2019 Off-Centered Art Series. The name The Perfect Disguise was the inspiration for the illustration design as it’s a play on words with whether or not the beer is actually a Kolsch or an American IPA. Hacker artfully portrayed that mystery by creating a German waiter dressed in lederhosen as a nod to the Kolsch style and added a hop popping out from his neck and controlling the robot, which represents the American IPA. The bright yellow and orange packaging is a nod to the golden color of the beer.