Labor Day. A day off to reflect on labor. Well, for some people. Others needed to keep on laboring for those of us who ran out of paper towels. Boy oh boy, labor. We sure do a lot of it, don’t we? At least five whole days out of every seven. Sheesh. Who cut this deal, anyway? Why wasn’t I consulted? It’s a system that only became tolerable because millions of people over hundreds of years labored, protested, organized, died and fought their overlords and authoritarian states just to get rid of the insane stuff — like slavery, child labor and sin-eaters. Viewed in that light, the eight-hour work day and five day workweek interspersed with national holidays is surely a privilege, but why did we stop there? Can’t we keep striving to work a little less and be a little bit freer from the shackles of this economic system that was cobbled together on the fly by greedy swindlers before any of us were born?? Then again, I really did need those paper towels. Imagine if I ran out of beer! Maybe forget I said anything. Here’s five beers to know this week. This September it is King Records Month in Cincinnati, and to celebrate Listermann Brewing Co. is releasing a special beer that celebrates King Records’ 75th anniversary while also honoring four important alumni of the record label with a collectible variety pack. The beer’s name, The King of Them All, references the day, 75 years ago in September 1943, when WLW radio performers (and future Country Hall of Fame inductees) Grandpa Jones and Merle Travis recorded the first songs for the label.

Driving back from this first recording session, Syd Nathan, the label’s founder, came up with the name “King” for his new business while brainstorming in the car with Jones and Travis. Syd, determined and ambitious, declared his record company would be “the king of them all.” Indeed, five years later, King Records was the sixth largest record company in America with a racially integrated staff of 300 employees, its own pressing plant, national distribution system, recording studio, art department, legendary engineers and producers, and the most broadly-based roster of R&B, country, jazz and pop artists. For nearly 30 years, the biggest independent record company in the nation operated out of Evanston in Cincinnati.

This tribute beer is the last in a summer beer series that the brewery has developed in partnership with King Studios and the design and print shop We Have Become Vikings to celebrate the 75th anniversary of King Records in Evanston. The The King of Them All is a New England-style IPA brewed with Citra, Rakau, Centennial and Simcoe hops. Coming in at 6 percent ABV, The King of Them All was made to be accessible to all types of beer drinkers, with very little bitterness and highlighting flavors that are reminiscent of the orchard: citrus, strawberries, mangoes, pears, apples and light florals. Listermann Brewing is generously donating 10 percent of the beer proceeds to King Studios.

The beer will be on tap at Listermann’s for the month of September and will also available to purchase in a takeaway four-can variety pack that will honor four important King players during King Records Month. The artwork for each can has been designed by We Have Become Vikings (WHBV) who have been commissioned to design portraits of these music legends that will appear on the cans along with short biographies composed by music historians. “This beer has been a runaway hit for us, so it’s great to get it into cans,” said Steele, brewmaster and cofounder of New Realm Brewing. “Now it’s so much easier to share this fantastically tropical fruity IPA with our friends near and far.”

A thriving hop mecca, Hoptropolis is built upon a foundation of Citra, Mosaic, Loral and Azacca hops. An American IPA with tropical fruit, floral, citrus and stone fruit aromatics, this beer pours a striking golden color with a light haze. 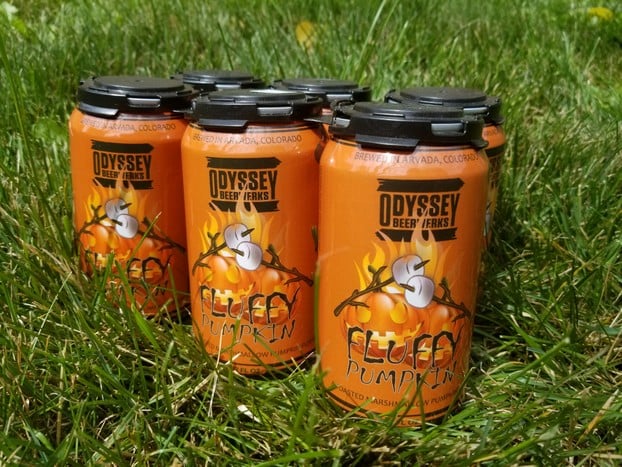 Odyssey Beerwerks has been fluffing your pumpkin since 2013. This month Fluffy Pumpkin Toasted Marshmallow Porter is available along with its bigger, badder, whisky barrel-aged imperial version. As Odyssey Beerwerks’ most popular seasonal, Fluffy Pumpkin is brewed with ample amounts of roasted pumpkins, select seasonal spices, vanilla and marshmallow, and hits the spot for those of us longing for the cool snap of fall. The imperial version is now in its second year, and although it weighs in at 11.666 percent ABV and 75 IBUs, it sips extremely smooth and will have you longing to sit around the campfire ring. But, it is in limited supply and is probably already gone. Alaskan Brewing Co. always has great seasonal concepts. Its latest autumnal beer is Cranberry Tart, taking inspiration from the season of harvest and foraging by featuring local Sitka spruce tips along with a medley of berry flavor. This autumnal wheat beer features a hint of spruce notes and is tart at the beginning, with sweet cranberry and citrus mellowing the overall taste. Beer drinkers will notice light pink highlights in the pour and a subtle dryness in the body. Its light tartness provides a counterbalance to salty, savory holiday foods like turkey, ham and king crab.

“Alaskans spend this time of the year getting ready for the long nights of fall and winter,” said Andy Kline, communications manager at Alaskan Brewing. “Foraging, fishing the last salmon runs, harvesting from their gardens, picking wild blueberries, currants and high bush cranberries — it’s a time of change and preparation. This beer is a celebration of the change of seasons that affects every person and animal that makes Alaska their home.”

“When we start dreaming up a new beer, we try to think not only of the way we want the beer itself to taste but all of the outside factors that affect people’s experience of enjoying the beer too,” remarked Alaskan Head Brewer Rob Day. “We think about the time of year, the different meals that someone might eat with the beer, even the activities that they might be doing when drinking our beer. All of that influences which ingredients we use and what flavors we want to bring out. This beer is crisp and a little tart to cut through the rich foods we eat in fall and winter, especially around the holidays. This beer is perfect for that — it’s got fun flavor that can stand alone, but it’s also a great food-pairing beer.”

The label features the Alaskan Moose, the world’s largest moose variety, looking up through a patch of high-bush cranberries — a site familiar to many who explore Alaska’s wild country in the fall. Leading Pike Brewing Co.’s new packaging launch, Pike Space Needle IPA is being released mid-September with a brand-new can design. Created by Cofounder Charles Finkel, the star “P” design was first market-tested on Pike Pils 22-oz bottles before being adapted for 12-oz cans in response to overwhelming positive feedback. The new logo will be used across Pike’s beer packaging, evoking the brewery’s retro roots and continued evolution into the future. Long-time Pike fans will recognize the new design’s through line.

“The star, as well as the sweeping font, have been part of the Pike brand since its inception, appearing on labels since 1989,” Finkel said. “We modernized our packaging while maintaining a connection to our own history. Rose Ann and I are proud that Pike Brewing Co. continues to grow and evolve as the goal is for Pike to become a 100-year-old independent brewery.”