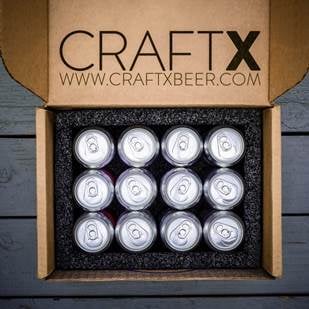 “Through CraftX, we’re bringing the artisan brewery experience to our members doors by providing the accessibility and circulation of these new and exciting styles, while also educating them about the specific breweries and industry as a whole,” said Toplitzky. “We want to provide educational curation on the artisanal craft behind each style and brewery that we feature.”

CraftX’s website will feature educational components including podcasts and vignettes from the brewery partners highlighting their businesses.

All of the beers featured in the CraftX membership box are rare styles that are only available in the brewery’s tasting rooms and local restaurants and have never been packaged for release. CraftX considers consumer reviews, personal taste tests and under-the-radar brewery tours to determine ideal partners. Initial partner breweries include Four Sons Brewing, Latitude 33 and Indie Brewing among others.

CraftX oversees the canning of each batch it secures, ensuring the beer is freshly canned no more than a few days before it’s shipped out. The cans bear branding featuring the breweries’ own creative labels. CraftX embraces the underground beer trading culture — a practice among beer enthusiasts to swap rare beers with each other and has designed a box that can be shipped up to four times.

For $60 per month ($50/month for first 500 subscribers), the CraftX 12-pack membership boxes include six, 16-ounce craft beers with two different styles from each of two breweries. At launch, CraftX will be available in 38 states and Washington, D.C. Members may stick with a standard split of three beers of each style or customize up to a 5-1 split, per brewery based on their own preference.