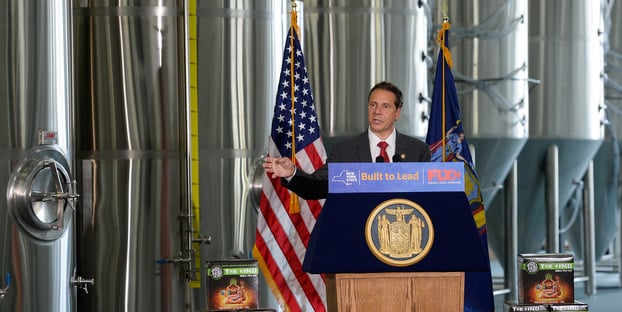 The Governor announced the changes at a ribbon cutting ceremony at Three Heads Brewing in Rochester — the region’s newest craft beer destination. The $4 million project includes a 15,000 square foot space for brewing and a 30-barrel fermenter to allow Three Heads Brewing to offer different seasonal and one-off beers every three weeks in the 2,100 square foot tasting room.

“We as brewers applaud the actions of Governor Cuomo and his administration,” said Dan Nothnagle, CEO of Three Heads Brewery. “His legislation has made it easier for us to do business in New York State and has spurred the growth of the brewing industry. The fact that we are about to open a 20,000 square foot brewery owes a great debt of gratitude to these initiatives, and we look forward to representing Rochester and New York State on the national brewing stage.”

The legislation would amend ABC Law to include the following:

Expand Sunday Sales: The Alcoholic Beverage Control Law includes provisions strictly prohibiting the sale of alcoholic beverages at on-premises establishments (restaurants, bars, taverns) before noon on Sunday. The Governor’s legislation would create a permit to allow these licenses to serve between the hours of 8 a.m. and noon on Sunday.

Modernize the Licensing Process: The ABC Law contains provisions, known as the “Two Hundred Foot Law,” prohibiting full liquor licenses to locations within 200 feet of a building that is exclusively used as a school or place of worship. There have been numerous examples where the local municipality, school or place or worship has not opposed, and in many cases supported, the approval of an application only to see the business denied because of the Two Hundred Foot Law. The law was first enacted in 1892 and included in statute when it was adopted in 1934, and strictly prohibits the SLA from issuing a license to a facility in that vicinity. The Governor’s legislation would provide the SLA with discretion to consider license applications for restaurants that fall within the Two Hundred Foot Law, provided the local municipality, in addition to the school or place of worship, are provided prior notice and an opportunity to be heard on the application.

Reduce Paperwork for Craft Manufacturers: At the 2012 Wine, Beer and Spirits Summit, Governor Cuomo ended the State Liquor Authority’s policy prohibiting multiple manufacturing licenses at the same location, recognizing the additional burdens this placed, for example, on a small winery that wanted to also make whiskey — including building a separate facility. However, businesses holding multiple licenses must still file paperwork and renewals for each separate license. The Governor’s legislation would combine craft manufacturing licenses into one application to reduce burdensome paperwork for these small businesses.

Authorize the Sale of Wine in Growlers: Current law requires that wine sold at retail for off-premises consumption be kept in their original sealed containers, and consequently, New York wineries are prohibited from filling growlers. This prohibition unduly burdens wineries that can open a container to sell wine for on-premises consumption, or can sell wine for off-premises consumption, but cannot fill a growler to be taken away from the winery. The Governor’s legislation would enact a common sense change to the law to allow wineries to fill their customer’s growlers. In addition, the Governor’s legislation would authorize wineries and farm wineries to allow customers to take home partially finished bottles of wine.

Reduce Fees for Craft Beverage Salespeople: The ABC Law currently requires that any salesperson or solicitor employed by a manufacturer or wholesaler must obtain a solicitor’s permit in addition to a bond. Recognizing the financial hardship imposed by these unnecessary additional fees, the Governor’s legislation would reduce the fee for a solicitor’s permit and eliminate the bond requirement.

Reduced Fees for Small Wholesalers: The primary business of most alcohol beverage wholesalers is selling their products to licensed retailers, such as bars, restaurants and liquor stores. However, there are currently a number of small wholesalers in New York that sell limited number of brands they import directly to large wholesalers for distribution to retailers. Under the current law, these small wholesalers must pay the same amount for their license as their larger counterparts, with costs ranging from $1,460 for a one year beer license to $27,280 for a three year liquor wholesale license. This financial burden often requires these small businesses to make a choice between continuing to hold a New York wholesale license or to relocate their business outside of New York. The Governor’s legislation would amend the ABC Law to create a low-cost “importer’s license” that would be available to wholesalers that sell only to other wholesalers.

The new legislation builds on the progress made by the Governor over the past five years, including enacting the Craft New York Act, to cut burdensome requirements on producers and ease restrictions regarding the marketing of craft products. Since 2011, the state has implemented a number of significant reforms and expanded programs to grow the craft beverage industry, including creating new farm-based manufacturing licenses, launching a $60 million statewide promotional campaign and hosting wine, beer and spirits summits across the state.

The success of New York’s investments in the craft beverage industry can be seen from the Finger Lakes to the Capital Region, with the number of microbreweries in New York increasing 248 percent since 2010.

New York is now home to nearly 900 wineries, breweries, distilleries and cideries. The number of craft beverage producers in New York has more than doubled from 2011. Since 2015, 177 new manufacturing licenses have been issued, including 15 new cidery licenses, 42 distilleries, 29 winery licenses and 91 new brewery licenses. Combined with distribution and retail, producers account for more than $27 billion in economic impact and support tens of thousands of jobs statewide.