The price of success is hard work, dedication to the job at hand and the determination to apply the best of ourselves. While that price comes from within, women should still be aware of the price of their time and effort. Below is an awesome chart of average brewery salaries via craftbeer.com. Beer’s magnetism attracts all races, all ages and all genders. One might say the diversity of craft beer in America represents the diversity of craft beer characters in the industry. While it’s easy to say one of the most passionate and character-driven demographics in the craft beer industry is women, is that really true? How many women are actually working in the beer industry? We decided to ask Bart Watson, economist for the Brewers Association (BA). Watson shared with us some interesting data from a Stanford research team, which can be attributed to Dr. Sarah Soule and Dr. Shelley Correll, both of Stanford University. Listen to these numbers:

For founder (of breweries from 2014 that were still open at the time of their research), they coded 1,993 breweries (the rest they couldn’t find info on, etc.). Of those, they found that 20 percent (399) had at least one female founder, of which 40 (2 percent) had an exclusively female founder(s).

For CEO, they coded 2,095, of which they found that 17 percent (349) had at least one female CEO — only 67 of those (3 percent) had an exclusively female CEO, the rest were co-CEOs with at least one male (typically wife/husband team). The headbrewer/brewmaster stats show the least females. They coded 1,717 and only found 4 percent (76) with a female head brewer/brewmaster. Of those, only 2 percent (38) were exclusively female.

In all, they were able to code at least one of those categories for 2,536 breweries. Of those 21 percent (543) had at least one woman as founder/CEO/or brewmaster/head brewer.

While this information is a few years old, we can see that women still have an enormous space to grow within the brewing industry. According to the Beer Institute, the industry supports some 1.75 million American jobs, and it’s growing aggressively — craft breweries specifically. In 2015, craft brewers produced 24.5 million bbls and saw a 13 percent rise in volume and a 16 percent increase in retail dollar value. Craft breweries already support an ethos of community empowerment, environmentalism and charity, so why not increasing gender equality? It seems like a natural fit.

In terms of sheer economics, we will definitely need more women as workers and as beer drinkers in order for the industry to grow. Looking at the stats, younger women are identifying more with beer and craft beer specifically. On women as customers, here’s some Nielsen data via Watson and the BA. The percent in the graph is the percent of craft volume that a group consumes. The second is their “index” where 100 means that group consumes the same percent as their percent in the population, so young women overindex on craft and older women under-index.

“I think one reason that the 21- to 34-year-old female group overindexes is that craft brewers don’t market to gender at all — they market to beer lovers,” explained Watson. “There are certainly still small brewers that return to the more traditional male-centric beer marketing, but in general, craft brewers are marketing to their local community regardless of gender. I actually can’t think of too many female-specific marketing campaigns, but your average small brewer is simply using gender-neutral marketing.”

Get some advice from top women in brewing

Armed with all of this info, how do you translate your enthusiasm into an actual job? Some people get their start with a cold application. Just waltz right into your favorite local brewery and let them know that you are interested in working hard. Drop off your resume to HR or finagle lunch and a beer with a hiring manager. Just be ready to say things like, “I’ll do just about anything you need me to do around here” because competition is fierce (regardless of gender). Volunteering to give tours, help with odd jobs or work events is also a great way to build some beer cred. Once you do find that open position, here’s some solid advice from women who are already very successful in the beer industry. As far as advice goes for women looking to join the industry, I would say be strong and be yourself. While this might still be considered a male-dominated industry, I encourage women to join. I really thank Louis Glunz Beer Inc. for their extensive education and training for sales reps across product knowledge. Knowing your portfolio and your competitor’s portfolio is key. Educate yourself, too — there are so many ways to expand your knowledge of the industry, from books to websites and more. It’s also extremely important to know your customers, get to know their customers and pay attention to what consumers are buying. Gain the trust of your customers by building relationships and that will truly go a long way. This job can be challenging, but it’s an extremely rewarding one to have if you’re passionate about the industry. Your work ethic will pay off more than you know, so plan on working hard and staying strong, and lastly, enjoy it. Be passionate and ready to work your ass off but don’t lose your sense of humor. You’ll work 10, 12, 14 hour days; a sense of humor (and beer) helps everyone get through the long hours. If you don’t have experience, get your foot in the door at a brewery in any way possible. Be a regular in the tap room, volunteer to help the brewers shovel spent grain out, hand bottle or can or volunteer to pour at fests. The most important piece of advice given to me when I started brewing: Always ask questions and never stop asking why. Five brewers will give you five different ways of doing the same process at the same brewery. Know why. A fresh pair of eyes is a fresh perspective. You might see a more efficient way of doing a process, so speak up if you think of a better way. 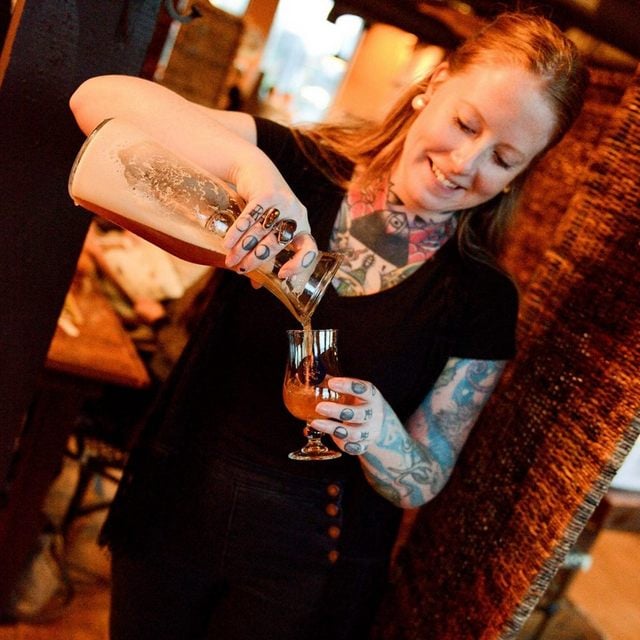 When gearing up for the position with Global Beer Network, a couple words of wisdom that I think helped me: Make eye contact. One way I have found to be taken seriously is really a small detail, but look whomever in the eye when you’re interviewing. It shows confidence and it shows you mean business! When you interview for a beer industry position, you are likely speaking to a fellow beer lover or nerd, so the whole “fake it till you make it” only goes so far. You never know when your interviewer will ask you about IBU and ABV ranges for specific beer styles (yes, this has happened to me before). Lastly, a piece of advice from my old man: Go with the firm handshake. No wimpy wrists. First things first: “It’s always been this way” is bull. It’s an excuse for complacency. Every day in the brewery, you can and will be confronted with countless decisions and situations. Face every single one of those with the confidence that if you don’t know the answer right then, it is OK. You will not have all the answers all the time, but you open yourself up to growth and trustworthiness when you can answer “I’m not sure, but I’ll find out.” But here’s the key — go figure it out! Know when you don’t know, but also know you can find the answer. Sometimes the people around you can be your best resource. Leveraging your team, your combined knowledge and your trust in each other will help you face any challenge and work toward finding the answers you need. The best advice I can give another woman trying to enter the craft brewing business is study, study and study some more. Pick a brewing education program that fits your needs. Read as many MBAA or ASBC articles as you can. Follow blogs that keep you informed on the industry [ahem]. Put yourself in a position so that when you walk into an interview or your first day at a new job you know what it is all about. Education and knowledge is power, and it is something no one can ever take away from you.