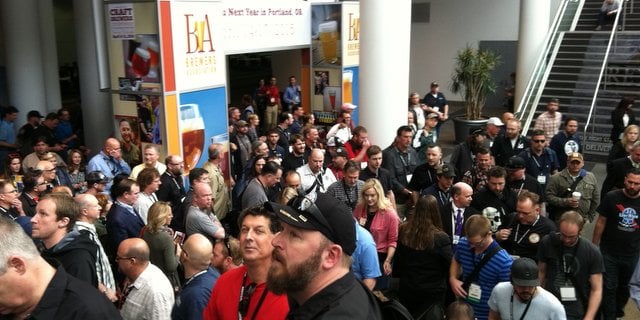 Anybody who is anybody in the craft beer industry knows that the Craft Brewers Conference and BrewExpo America (CBC) is the biggest, most important industry event of the year. It’s when brewers, suppliers and industry experts come together to show off their new wares, ingredients and brewing processes and talk about the ins and outs of running a craft brewery. It’s also the most fun you’ll have “working” this year. Just check out our archive of CBC coverage from the past three years and you’ll soon see that you can’t miss it this year.

Philadelphia will welcome the 33rd edition of the CBC from May 3-6. CBC 2016 also serves as home to the World Beer Cup, often referred to as “the Olympics of beer.” Since the inaugural competition in 1996, this event has brought together the best brewing talents and has created awareness about different beer styles and flavor. A qualified professional panel of beer judges will honor the top beers in 94 style categories from more than 58 countries. This year promises to be even more competitive than ever, as the craft brewing renaissance continues to reach all corners of the globe.

An estimated 13,500 attendees will have the opportunity to visit with over 600 exhibiting companies and hear from more than 125 presenters, including Brewers Association Director Paul Gatza and Chief Economist Bart Watson who will deliver the annual State of the Industry address, as well as keynote speaker Billy Beane, Executive Vice President of Baseball Operations for the Oakland A’s and the inspirational subject of best-selling book and subsequent movie Moneyball.

Beane is considered one of the most progressive and talented baseball executives in the game. He will share his innovative, winning approach to management and leadership, and how his Moneyball philosophy can be adopted for the craft brewing industry.

As demand for craft beer from small and independent brewers increases, CBC brings the community together in a collaborative and educational environment. New and veteran brewers have an opportunity to connect, share ideas and learn about a wide range of topics including brewery operations, brewpubs, export development, government affairs, packaging breweries, quality, safety, selling craft beer, start-ups, sustainability and technical brewing. With one of the most dynamic beer cultures in the country, Philadelphia sets the perfect stage for CBC.

Click here for a full schedule of events. After looking that over and getting far too excited, channel that energy to the registration page and guarantee your badge at this year’s conference.