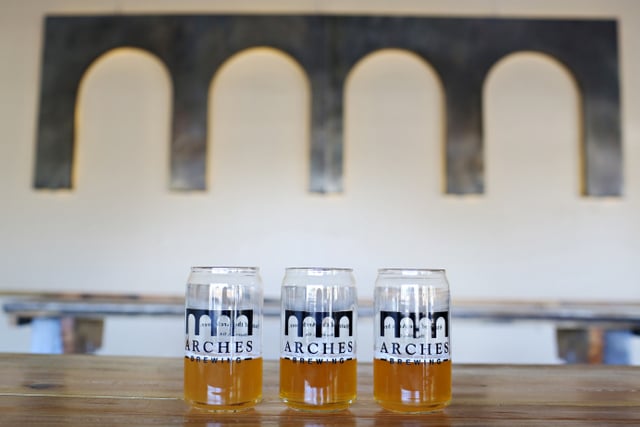 Hapeville, Ga.-based craft lager trailblazer Arches Brewing recently announced distribution expansion with several grocery chains across Georgia as a part of its recent production growth. The brewery’s popular Unseasonal Lager, Southern Bel’ and Queen’s Weiss canned brews will now be available at the majority of Kroger stores in the state starting in early March, in addition to an increased footprint with Whole Foods and Target outposts across Georgia.

“We’re thrilled to increase the availability of our beer and share our story more broadly across the state of Georgia,” said Arches co-founder Ryan Fogelgren. “Looking toward our second anniversary in April, it’s been a dream come true to see the demand for our beers continue to grow over the last year. None of us expected to grow this quickly and we’re so thankful for the support from the Hapeville and Atlanta communities and beyond.”

Arches is currently available in grocery stores across metro Atlanta, Athens, Peachtree City and Marietta — and as a part of this expansion will now reach even more surrounding cities. The brewery’s impressive distribution growth has been fast to match demand for its beers — it was only September 2017 that Arches cans first appeared in Atlanta-area package stores, and limited distribution in grocery stores started in December 2017 and January 2018. On the heels of today’s announcement, Arches will see a five-fold increase in beers going to package for grocery and package stores.

Yuengling now available in Kentucky on draft, in stores “We have been listening to our customers for some time now, and entering Kentucky was the natural next step in our expansion,” said Jen Yuengling, six generation brewer, D.G. Yuengling and Son. “Kentucky’s beverage scene is rooted in history, and we could not be prouder to bring the tradition of Yuengling family products and America’s oldest brewery to Kentucky.” “The MadTree family has a number of ties to the Knoxville and Chattanooga communities, so it’s really cool to be able to share beers in these areas,” says Cofounder Brady Duncan. “Partnering with Cherokee was an easy decision with their focus on community support and excellent service.”

“We’re excited to help grow MadTree in Knoxville, Chattanooga, and throughout Eastern Tennessee,” says George Sampson, Cherokee Distributing’s president. “The MadTree and Cherokee partnership just made sense. We share a common vision of delivering the highest quality products and serving our customers and community with pride and excellence.”

MadTree is well-regarded for its broad portfolio of beers, strict quality standards, and support for the community. MadTree is founded and continues to grow on the notion that beer builds community and community builds beer. They believe in supporting local vendors, philanthropic endeavors, and other ways to make a meaningful impact in the communities they serve.

DuClaw Brewing Co. of Baltimore announces a partnership with Cavalier Distributing for distribution in Indiana. Bars, restaurants and retailers in the state will begin stocking, and pouring DuClaw’s unique lineup of brews next week.

DuClaw Brewing Co.’s distribution network has been growing steadily since the 2011 release of “Sweet Baby Jesus.” The popular Chocolate Peanut Butter Porter took home honors at the Great American Beer Festival and has been leading the way for DuClaw into new markets ever since. Two Roads Brewing Co. of Stratford, Conn., will be rolling into the rest of the Commonwealth of Virginia starting in February. Two Roads also announced a continuing its partnership with Specialty Beverage, which currently oversees distribution of Two Roads products in northern Virginia. Two Roads is distributed in 13 states plus D.C., Ontario and Europe.

“Since launching Northern Virginia in May of 2017, we have worked with our distributing partner, Specialty Beverage, to bring our Road Less Traveled offerings to the Virginia craft beer community,” said Director of Sales Meghan Zachry. “Based on our great partnership with Specialty and the enthusiastic fan base that has welcomed us in the northern portion of the state, we are excited to expand our footprint throughout the entire state of Virginia.”

Two Roads Brewing was founded in 2012 by four friends who dreamed for years of starting a craft brewery. The company they created fosters a “road less traveled” philosophy in the beers they make and how they make them. In that spirit, Phil Markowski, their award-winning master brewer and 30-year craft beer veteran has created an extensive lineup that takes a unique twist on classic beer styles.

“Specialty Beverage continues to be committed to working with the growing industry’s best brewers and suppliers,” added Specialty Beverage Brand Development Manager Alexis Goldstein. “After our launch of the northern Virginia market last May, we are excited to announce that we have expanded our territory rights of Two Roads Brewing Company and will now be able to offer this delicious liquid to retailers and consumers across the state of Virginia.” Since opening in Bedford, Virginia last June, Beale’s has seen the surrounding areas of southwest Virginia embrace both the brand and the approachable, low-ABV beers that Beale’s Brewery offers, including its flagship lager Beale’s Gold.

“Lagers are seeing a resurgence,” said Beale’s Brewmaster James Frazer, who is also the brewmaster at Petersburg-based Trapezium Brewing Co. “At Beale’s, our goal is to make very high-quality versions of classic beer styles and provide a counter to all of the high-ABV and quirky styles crowding the craft beer market. We are hyper-focused on quality, while at the same time making craft beer that everyone can enjoy.”

The brewery’s flagship beer is Beale’s Gold, a Helles Lager that’s straightforward and easy to drink, full-bodied with a crisp finish. Beale’s Gold is the first Virginia-made beer packaged in an eight-pack of 11-oz stubby bottles, a unique packaging decision that’s both forward-thinking yet influenced by the heritage beers that have come before it.

Beale’s began distributing in southwest Virginia this past October, in the cities of Roanoke, Lynchburg and its hometown of Bedford. Richmond is the latest market where Beale’s is expanding as it pursues its plans for statewide distribution.

The brewery has signed with Loveland Distributing for its launch into the Richmond market.

“There’s just something about grabbing a good old stubby bottle that even the most hard-core beer nerds get excited about,” Frazer said. “This style of beer is deceptively simple. I love it because it goes with everything — it’s crisp and complex, but it’s also fun to have around to go with whatever you’re eating or whatever you’re out there doing. We can’t wait to get Beale’s Gold in front of a larger audience.”