Stone Brewing Co. — widely known for its ultra-popular craft brew concoctions and its irreverent marketing techniques — recently cast the first stone in a trademark dispute with the conglomerate that owns Keystone. In its complaint for trademark infringement, Stone Brewing alleges that MillerCoors, a subsidiary of Molson Coors Brewing Co., altered its marketing strategy to emphasize the “Stone” portion of the beer’s name, thereby potentially confusing consumers who might conclude that the two beers (Stone and Keystone) are somehow related.

Stone Brewing has plenty of fun with its claim, asserting that its “awesome brand” is being stolen, that the gargoyle that graces its beers is typically “slow to anger,” and referring to Keystone as a “watered-down imitation of beer.” All joking aside, though, Stone makes it clear that it is stone-cold serious when it comes to asserting its rights, stating that it intends to seek injunctive relief and treble damages for the infringement.

Stone Brewing has owned the trademark for the word Stone as associated with beers and ales since 1998. Stone claims that MillerCoors was aware of this fact since at least 2007, when it applied to register the mark “Stones” with the U.S. Patent and Trademark Office (USPTO). The USPTO ultimately denied the application because of potential confusion with Stone Brewing’s preexisting mark.

It’s worth noting here that one may acquire rights to a trademark even without registration. While the owner of an unregistered trademark may enjoy certain protections, registering the mark is far more protective, entitling the holder to sue infringers for damages in federal court. 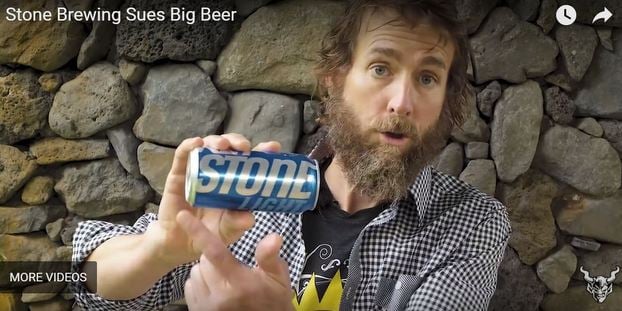 Stone’s registration of its mark will be helpful in its claim, but it still must show that MillerCoors’ rebranding will cause a “likelihood of confusion” between the two brands. The fact that both companies sell beer, and that they’re both using the word “stone” in connection with their product, are layups. It will be interesting, though, to see how each side addresses other relevant factors — such as their respective marketing strategies, distribution channels and sophistication of their consumers — to argue for or against confusion. Whatever the case, it’s clear that the result of this lawsuit isn’t set in stone.