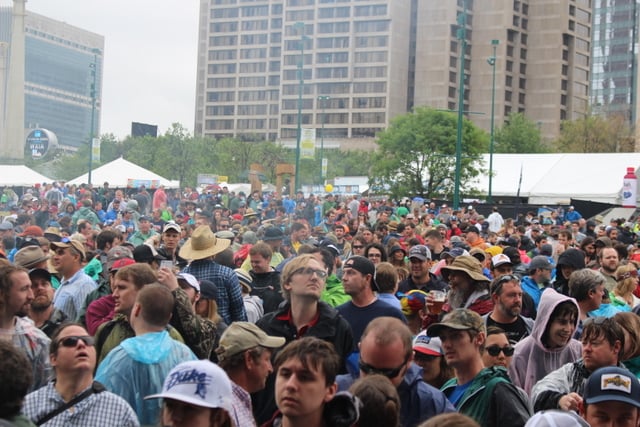 SweetWater Brewing knows how to party. We took the trip to Atlanta to enjoy the three-day music festival that SweetWater hosts every year known as 420Fest. There are obvious things that are cool about this right off the bat — tough to beat a big party that celebrates music, beer and herbal refreshments. But here are three things that stood out to us the most. So, not technically a part of the 420Fest agenda, but SweetWater uses this weekend as an opportunity to throw a party for its distribution and retail partners called Green Eggs and Jam. First off, if you haven’t been there, the SweetWater brewery is huge and awesome, and during this event it was filled with 600 of the brewery’s closest friends and all sorts of fun — giant games, live music, painted up hula-hoop dancers. We just thought it was a well done ‘thanks’ for its customers and partners.

One random person we spoke to was a manager at a World of Beer in Orlando. She was being recognized for how much SweetWater she has sold at her location and SweetWater paid for all of her travel expenses to this party and the music festival. We like cool, under the radar stuff like that. Just good business. Sure, most the 70,000+ festival attendees are just there to get weird and enjoy some tunes, as they would any other music festival. But in the SweetWater Experience tent, the brewery hosts a series of beer talks to deepen attendees’ relationships to the craft brewing industry and to the SweetWater brand. We particularly enjoyed the conversation with Zak Schroerlucke, marketing specialist for Crosby Hop Farm, who walked all of us through their latest varieties (which we also have way more about here). So, really only two takeaways. Ween was killing it in the rain and it was time to stop working.