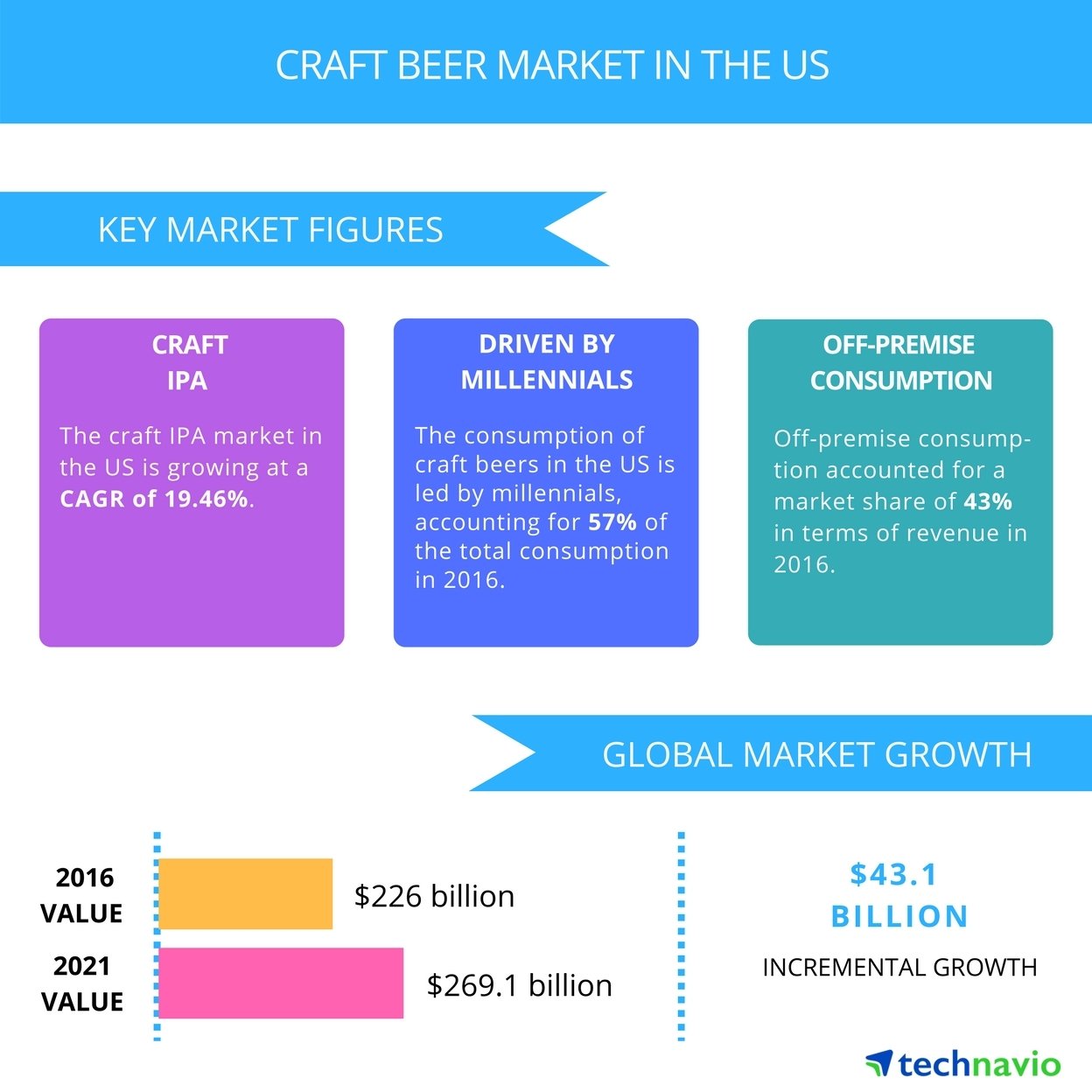 The international business brains at Technavio announced the top five leading vendors in the craft beer market in its recent U.S. report. This research report also lists nine other prominent vendors that are expected to impact the market during the forecast period.

The market research report predicts that the craft beer market in the United States will grow at a CAGR of almost 18 percent from 2017-2021. The demand for craft beer is increasing in the United States, and it is expected to remain high during the forecast period. New players are entering the market, and they are coming up with new products and new flavors. Players in the market are investing in increasing their production capabilities, and they are also investing in product innovations. Large players are acquiring small players to strengthen their positions in the market and to gain access to new products and technologies.

The craft beer market in the United States is subject to rapidly changing consumer demands and preferences. Manufacturers’ performance in the market may be affected by the changing consumer spending pattern. It may also be affected by consumer tastes, regional, national and local economic conditions and demographic trends. The changing economic conditions are affecting customers’ living standards and vendors’ businesses.

“The market is highly fragmented with the presence of numerous small and large vendors. These vendors compete based on factors such as price, quality, innovation, reputation and distribution,” says Manjunath Jaganathan, a lead alcoholic beverages research analyst from Technavio.

This report is available at a $1,000 discount for a limited time only: View a market snapshot here. Cue the sad trombone. Anheuser-Busch InBev has 16 breweries, 23 packaging and agriculture facilities and 17 distributorships. The company was ranked 56th in Forbes Global 2000 ranking in 2016. Forbes Global 2000 is an annual ranking of the top 2,000 public companies in the world by Forbes magazine.

Boston Beer offers more than 60 styles of beer under the Samuel Adams brand. The company portfolio includes other brands such as A&S Brewing, Twisted Tea and Angry Orchard. The company had about 1,505 employees as of December 2016. Samuel Adam is one of the largest-selling craft beer brands in the US.

D.G. Yuengling & Sons is one of the oldest family-owned breweries in the United States. It manufactures lagers, porters and ales for its wholesalers. The company also sells barware, glassware, apparel and collectibles through its online store. In 2006, 2007, 2008 and 2013, it won the Impact Hot Brand Award.

New Belgium Brewing has breweries at Fort Collins, Colo., and Asheville, N.C. The company has about 800 employees and is a Certified B Corporation. The company opened its new brewery in Asheville in 2012. It is the fourth-biggest craft brewery and eighth-largest brewery in the United States. The company is 100 percent employee-owned.

Sierra Nevada is a craft brewery manufacturing ales and lagers. It has breweries in Chico, Calif., and Mills River, N.C. It is one of the largest privately-owned breweries in the United States. The company has received various awards for its products and is known worldwide. The company produces close to million barrels of beer annually.