You gotta love the craft beer community. From sustainability and social responsibility to crafting beers for those with specific dietary requirements (hey there, gluten-free and gluten-reduced beers!), craft brewers around the country go out of their way to spread the craft beer love to all walks of life. Take Vegan Oktoberfest, for example: It’s the world’s first event to marry an authentic Oktoberfest celebration with an all vegan menu. Due to the huge turnout at last year’s sold out event, the organizers have doubled down on their success — expanding Vegan Oktoberfest over two days at a spacious new venue in the heart of Downtown Los Angeles. The event, which will accommodate 3,000 guests per day, will feature live Oompah bands, Bavarian maidens and lederhosen lads, and of course, refreshing and delicious vegan craft beer poured to perfection by dozens of great breweries. 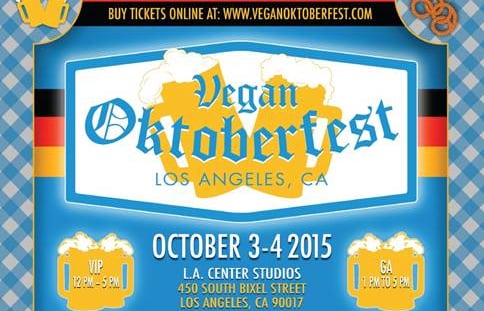 Vegan Oktoberfest will also benefit a good cause, with a portion of the proceeds going to Expand Animal Rights Now, an organization dedicated to using the legal system to help animals.

“I am so proud to be producing this incredibly unique and fantastically fun event for the second year in a row,” said Jill Ryther, also of Red Pill. “Vegan or not, this event has something for everyone. I have no doubt that Vegan Oktoberfest will soon be known all over the world as the combination event that changed food and beer festivals everywhere!”

Every general admission or VIP ticket comes with a complimentary beer stein and unlimited beer sampling. In addition, many food vendors are creating exclusive menu items that are only available at Vegan Oktoberfest. Participating food vendors include many of LA’s most acclaimed vegan restaurants such as Sage Organic Vegan Bistro, Kind Crème, The Ridiculous Baking Company, The Green Truck, Divine Dips Ice Cream, and BlodeKuh Artisan Vegan Cheese. Visit the Vegan Oktoberfest website for all the details.