We all know that IPAs are king today in the craft beer marketplace. This fact urged a long-time craft beer powerhouse, Sam Adams, to develop its own IPA  or risk being left in the dust. The 2015 launch of Rebel IPA was a success at the outset, but its tough for just one IPA recipe to stay that consistent sales-wise on that broad of a scale for very long.

“This is the first time we’ve significantly changed the recipe of a flagship beer. As hop varieties evolve, we want to use the new varieties to keep brewing the best beer possible,” said Jim Koch, founder and brewer of Samuel Adams. “Like with the original Rebel IPA recipe, this release isn’t a palate-scorching hop-bomb. Our goal was to showcase the intricate aromas and flavors of hops, especially with new, experimental hop varieties HBC 566 and HBC 682. Not that long ago, it was a challenge just to find quality, flavorful hops and now, we’re developing our own proprietary hop with unparalleled lemony-lime, orange and eucalyptus notes. It’s wild to think how far the brewing industry has come and that today, a beer can evolve.”

After more than four years, the brewers undertook what they called “Project Lupulus,” an experiment that takes advantage of hops that were not readily available or have been newly cultivated since Rebel IPA first launched in 2014. As part of this project, the brewers collaborated, starting in 2013, with a hop breeder in Yakima Valley, Wash., to create a new hop variety proprietary and exclusive to Sam Adams called HBC 566.

After months of experimenting with dozens of trial batches at the Boston Brewery, the brewers are now ready to release the new Rebel IPA recipe which is brewed with HBC 566 and another new experimental hop variety for bittering, HBC 682. Rebel IPA now has a more intense juicy, tropical and citrus flavor supported by a leaner body and a crisp, clean finish to optimize the hop character.

“We averaged at least one new test brew in the nano each week since we started tinkering with the Rebel IPA recipe and our new hop varieties,” said Brewer Megan Parisi, who manages the nano brewery. “It was awesome being able to brew with a new hop variety that had never been used. After dozens of test batches of single hop brews, various blends, and of course, taste testing, it is a pleasure to finally share our new Rebel IPA recipe with drinkers.” 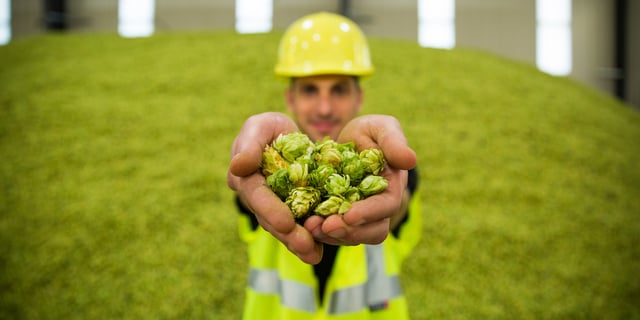 Paying homage to the original recipe, Rebel IPA is brewed with a few of the original hop varieties including Cascade, Centennial, Simcoe and Chinook. For the 2017 release, the brewers added Mosaic hops, alongside HBC 566, a new hop proprietary to Sam Adams, and HBC 682, a new, experimental bittering hop.

Ultimately, seven hops were chosen for their unique character, including:

• HBC 566: A Sam Adams proprietary hop variety, HBC 566 adds a touch of lemon/lime, orange and eucalyptus flavor that can be found with the addition of this exclusive hop variety;
• HBC 682: Experimental hop HBC 682 is used solely as a bittering hop in Rebel IPA to impart a pleasant bitterness with a strong and earthy aroma;
• Mosaic: New to Rebel IPA, Mosaic hops impart tropical, fruity and pines notes. In 2011, Sam Adams was one of the first breweries to experiment with Mosaic hops in a collaboration beer with Dogfish Head called SAVOR Flowers;
• Cascade: A leading hop in the new Rebel IPA, Cascade hops impart floral, spicy, citrus and grapefruit character;
• Simcoe: A staple of IPAs, Simcoe hops impart a strong piney character as well as apricot and citrus notes;
• Centennial: Centennial hops are intensely floral with hints of wood and a medium citrus character;
• Chinook: Chinook hops provide a piney character and a light spice note;

To dial up the hop impression, the newly reborn Rebel IPA removed caramel malt from the grain bill and now is brewed only with Samuel Adams special two-row malt blend. By removing the caramel malt, Rebel IPA’s body is less malty, resulting in a cleaner, brighter IPA with more tropical, citrus and pine-forward notes.

But wait, there is more

This month, Samuel Adams Rebel Juiced IPA, a West Coast IPA infused with mango, hit the shelves in cans and bottles. At 55 IBUs, the brewers selected the hop varieties based on their tropical aromas and juicy flavors rather than for their bitterness. Zeus hops were used in the kettle and Mosaic and Mandarina hops were used to dry hop. The result is a medium-bodied beer with a slightly veiled golden color that brings a big tropical aroma of guava, passion fruit and mango.