Craft beer is becoming a bigger tent by the day (literally two new breweries open every day, going by the stats), which isn’t news as sharp growth has been the story of the industry for almost a decade now, but at this 2017 Craft Brewers Conference, much of the focus is on managing that bigger tent — who is in it, what are they doing, are they doing things the right way and how can the tent continue to grow without compromising its structure?

There also seems to be a rift forming between the craft brewing industry vets and some of the younger upstarts.

We have more to say over the coming weeks, but here are  [we’ve been drinking] four broad strokes to digest for now. 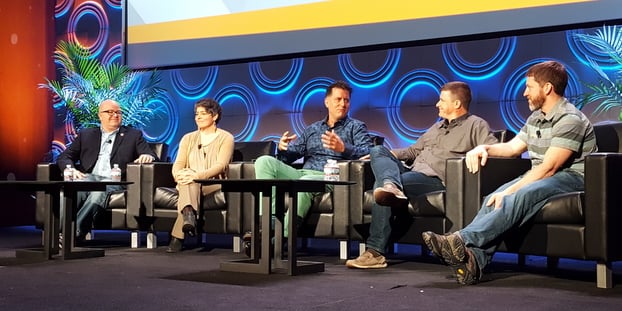 The Brewers Association is always focused on quality, but that conversation took center stage to open the General Session of Day 2.

The quality conversation for the panelists on stage literally and figuratively starts with defining the term. Larry Horwitz of Four Strings Brewery cautioned brewers to not confuse a beer’s subjective qualities — great hop flavor! — for its underlying objective quality. Objective flaws in beers with lots of flavor are being caught in today’s competitive, more sophisticated market place.

“Every successful brewery needs to solve the problem of high-quality beer,” he said. “It’s not an accident; it’s a willful act. We will plan for creativity and innovation. We put a ton of resources into innovation. If you plan carefully, you can be both innovative and brew a great beer that’s high quality and creative.”

We will have more on this full conversation next week.

2. Beer: Slower growing, but more profitable than ever

Some bullet points from Paul Gatza and Bart Watson’s State of the Industry presentation:

“There’s still growth out there and someone is going to get it,” Gatza said. “It might be the large brewers going into craft, it might be craft brewers brewing lighter styles. Could be import brands. There’s a lot of growth out there, just have to figure out how to get it.”

The Brewers Association announced the formation of a permanent diversity committee that will be charged with expanding the inclusivity of the industry, both in its hiring and its customer focus.

“This is not a problem to be solved, but a value to be lived,” said president Bob Pease.

2017 is going to be mostly for questions and brainstorming to develop some guiding principles and tasks. One early idea so far has been hosting events in neighborhoods that wouldn’t typically be targeted.

Along those same lines, another initiative the association is taking a stance against offensive and derogatory labeling and marketing. They are updating the language in their code regarding offensive and explicit labels, and any submission to the Great American Beer Fest or World Beer Cup that wins and has a name that is deemed by an outside panel to be offensive, the beer will still win, but it will not be announced on that day and the brewery will not be allowed to market that product as an award winner with the Brewers Association stamp.

4. Yet another craft beer dividing line The craft beer definition has always seemed to cause a certain existential crisis, but another craft beer rift was hinted at by Gatza (“Are there going to be divisons in age of breweries? Or business models? Size? Can we stay together as a community? I hope so.”) and then mused about by keynote speaker Dick Cantwell.

“It’s kind of inevitable the sensibilites of one generation will inspire an antireaction in the next. That’s where the opportunity lies after all. Earlier models already hadn’t been taken an developed. What’s more, a version of the familiar can become imprinted even if one ends up in the family business. On the other side it’s not unreasonable to point out that amber ale, that pale ale, those couple of hybrid lagers put a roof over this movement’s head, mister…. Clearing regulatory brush and taking the early blows from brewers who thought things pretty well settled already.”

“We have something precious and strong in common, and recognizing this might require every one of us to consider other perspectives along the continuum of craft.”

I also liked this analogy of where/when innovation and creativity from craft beer should really come forth, comparing it to a highlight defensive play in baseball:

“The individual play may be unique and web-gem worthy, but experience and preparation allowed for the possibility of his making the play successfully. He didn’t just make that play. It came from him making a bunch of regular plays since he was four years old. … Making a delicious and eye-opening Double IPA probably means you made a couple pretty good single ones, likely hundreds of time.”

“There should be no shame in consistent excellence. Not everything we do is what we want to do. The right side of your brain of your business might be coming up with radical beers for the ages, but unless the left side isn’t paying the bills and taxes and meeting with distributors and chain buyers and staying in touch with legislators, all of that creative freedom is merely theoretical.”